Zagreb is a lively city at night. The crowd is generally younger, in the 20’s and 30’s or thereabouts. They populate the bars especially, and the eateries do not seem to be suffering. There’s a lot of interesting architecture.

I happened upon a street corner in Valencia where the idea of this painting occured to me. I modified the scene, chose my own lighting and color scheme and modified the architecture, and then placed the figure.

This is another in my series of Edward Hopper inspired pieces. I was born in the town where he was born and lived, Nyack, NY (1882-1967). His wife Josephine Nivison was also an artist. She contributed to his work as a model and as an artist.

This is another in my series of Hopperesque paintings. Hopper painted lonely scenes, even when there were multiple figures as there are here, much the same but seemingly unawares. Based on a scene I came across in Ghent, Belgium last summer, as I stood in a museum looking out the window.

La Cevezeria Alhambra in Valencia is famous in Spain for its tortillas. It’s a tiny place that at the time of this painting was run by a couple who had been there 37 years. After they retired their children took over. Looking through the window we see 3 people in conversation. We can almost hear the words passing between them.

There are two exposures of the painting. All images appear differently on devices. This one in particular is more diverse than most.

Cafe Tortilla is about a bar famous in Spain for its tortillas (Spanish omelets).  They make 5 or 6 varieties in their tiny kitchen.  After 37 years the couple retired.  He made the omelets and she served them with nary a smile.  She did not have time to smile.  The place was almost always packed.  You had to catch her eye to order- she would glance at you for a second as she sort of kept track of who was next.  You had to start talking right away or she was off.

We were there when a newspaper photographer shot the photo I used to create the painting.  He stood outside as the three of us were talking.

We stayed at a friend’s house in this small town in England near Cambridge, where they filmed episodes of Inspector Morse, a popular British detective show from the 1980’s or 90’s. It was a farm house converted to a residence, with much charm. It was heated by the huge kitchen stove with water circulating to both floors. Outside a fox would visit, looking for a meal of old cat whom we were there to care for. Our friends were off for a long trip to southeast Asia, gone for the month. We had use of their car, which we used to get to the train for the trip into London, which allowed us to see a few plays and see the museums again. 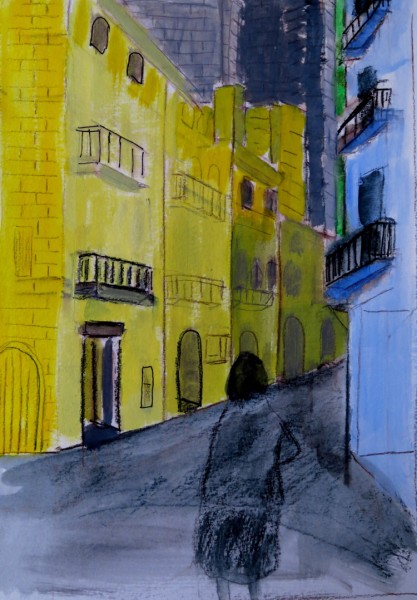 Sitting in Plaza Santa Catarina (study for the watercolor). This was the first time I joined a group of local water color artists who meet on Wednesdays.  Valencia has several watercolor groups who do urban or rural landscapes.