Zaandam was quite the industrial center and still there are two chocolate factories – we can smell the chocolate every day- and quite a number of other factories in the area.  The industrial revolution here was powered by windmills.  Most of them are gone- there were some 630 at the peak and there are 14 now.  Here are photos of a portion of what remains:

In the above mill they sell flour that I assume they grind there.  They have some speciality flours such as spelt and pancake flour –  I am not sure what they mean by that.  At any rate, the Dutch eat both savory and sweet pancakes.  Here’s a shot of the interior.

We walked along the Zaan river today.  Starting in the 17th century this area was heavily indistrialized.  At the peak of windmilll usage there were 635 in the immediate area, draining fields and running factories.  The mills powered lumber, paper, oil, flour and other factories.  Here are some fine examples of the houses of the era:

I guess I did not do enough walking yesterday, so we walked to downtown Zaandam. I photographed one of the houses Monet painted. It no longer looks the part, as you can see. There are about 35 Zaandam houses by Monet. There is a map you can use to see them all.

I saw one of Monet’s houses today, and it does not look the part, as you can see.  The port is still there but there is a house in the way.

Peter the Great lived nearby for 8 months, studying ship building.  The house was saved from collapse and is inside a building.  It is so badly sagging that when you enter you lose your balance.  It’s like being in a fun house with many crazy angles.  He was there to learn military ship building but found that the lack of written plans here to be counter-productive to his purposes and so went to England where they used plans.  He later returned to visit the village.  His landlord refused to see him, as Peter had lived there 8 months without paying any rent.

While Peg was shopping I did a few sketches while having coffee along a canal.  These are miniatures, about  2″ x 4″ in pen and ink:

Of course I have to do these sketches surreptitiously, and the people usually move a lot, so it is quite challenging.

[Every 5 years 3-5 masted sailing ships, most of them training vessels, come to Amsterdam.  We sat on the side of the North Sea Canal where I sketched.  And ate pofertjes!  (Small pancakes).   Here are my drawings and paintings from that event.

Broke ( (pronounced ‘brook’) in Waterland is definitely in Waterland, not only  because it is in the municipality called Waterland but because Waterland is aptly named.   The village is about as small as you can get- little more than a row of houses along a canal.  But what houses! 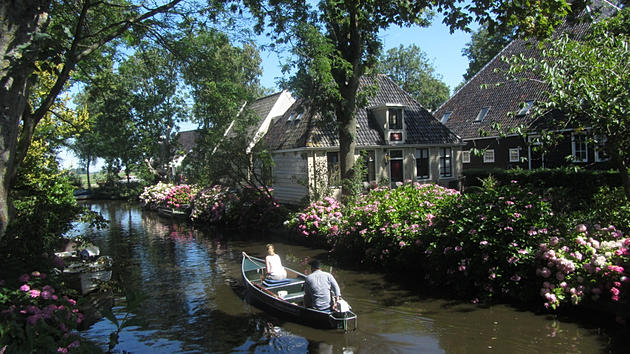 Here we are standing on the bank near the end of the canal.  Beyond are large fields and a canoe rental place.

This area is just north of Amsterdam and easily reached via the fabulous public transit system.  We got on the bus at Amsterdam Central train station and got here in an hour.

Much of Holland is on recovered land, called polders.  Holland is essentially the delta of the Rhine and sits at sea level at best-  what I jokingly refer to as Mount Holland is just 1000 feet

The Waterland area began life largely underwater, according to a map of the area as of 1000 CE I saw in one of the museums.

It was after 1:30 when we arrived at the town’s only eatery, Pannenkoekenhuis de Witte Swaen.

Pannenkoeken is Dutch for ‘pancakes’ but they are not limited to sweet ones, like thoses Americans eat for breakfast.  We ordered two ‘pizzas.’  They are not very much like an Italian pizza (neither is a Turkish one).  The pancake itself is more like a crepe than an American style pancake.  The one you see below has bacon and onion with parsley prinkled on top.  The other had tomatoes and some sort of Dutch cheese bearing no relation to mozzarella at all. 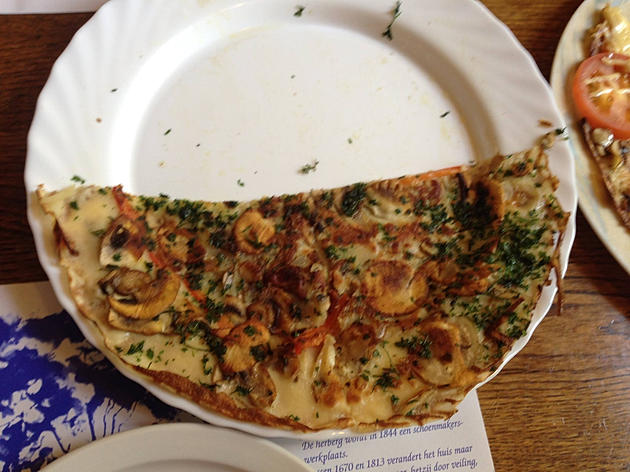 At other tables there were plenty of pannenkoeken mit slagroom, whipped cream that they dispensed from a large stainless steel aresol can, not a can from a grocery store as in other restaurants we’ve been in, so I think they whipped their own cream.

Not far away is the town of Edam (and Gouda is in the area too).  It is larger and perhaps a bit less charming than Broeke.  The clock tower has some dancing figures that appeared as we walked by at 4 p.m. A bir further on we came to the port, where the others ate ice cream and a bit later we shared some fries.  A group of locals drank at the bar next door, sitting on the sidewalk telling stories and jokes.  Across the street a couple and one of their friends sat in front of their garage drinking beer.  It was a pleasant, sunny afternoon in paradise. 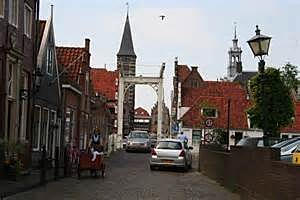