My contribution to the L’Art de Career (Valenciano for Art on the Street) in Picanya, a small town on the south side of Valencia.   It was sponsored by the Women of Picanya  http://www.picanya.org/persones/dones/activitats.  There are about 50 pieces hanging from the balconies celebrating women through March 20 2022.

Here are my comments:

This expressionist piece is about living our dreams, our desire to become who we want to be, to accomplish what we want to accomplish.  We all seek the path we find most attractive.

Expressionism rejects the restrictions of realism while remaining largely figurative-  you can recognize the object even if it’s not realistic.  It also can include abstract elements.  Here there are four  women, two playing musical instruments, one singing.  The fourth dreams of her possibilities.  Not all the figures are attractive- beauty is not a requirement for success.  There are two muses in the upper left and a third on the bottom left. They inspire the dreams.

The dreams of our youth influence the rest of our life.  Those of our mature years, our 30’s and 40’s, are increasingly influenced by experience. As we continue to age, we tend to become more realistic but still can have our dreams, guiding our later years.

They began delivery of the Fallas’ (sculptures) last Monday and were still assembling them as of this afternoon.  Here is an early look at some of the fabulous sculptures. 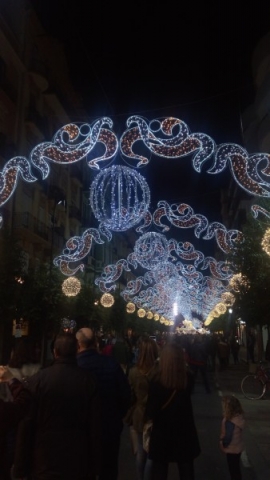 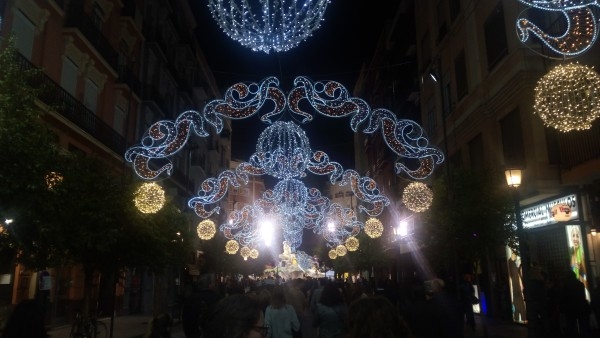 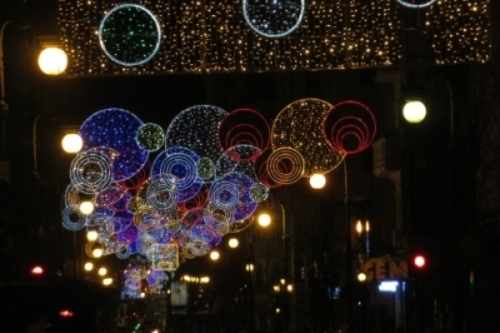 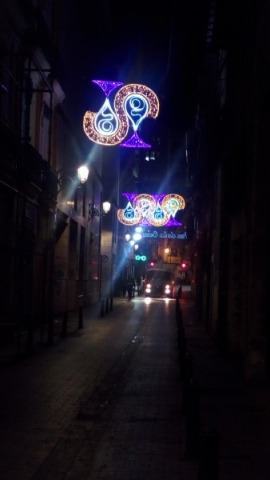 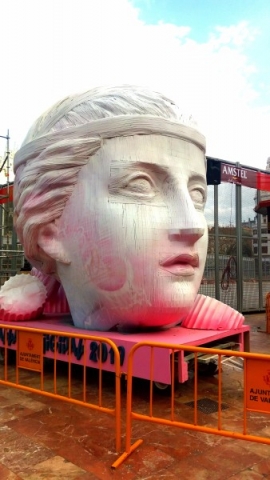 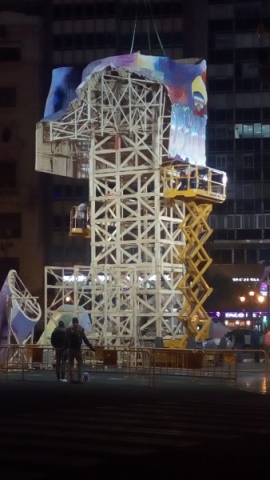 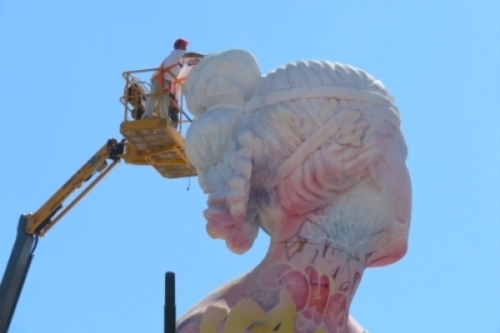 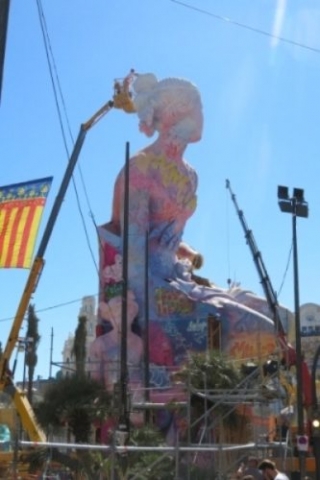 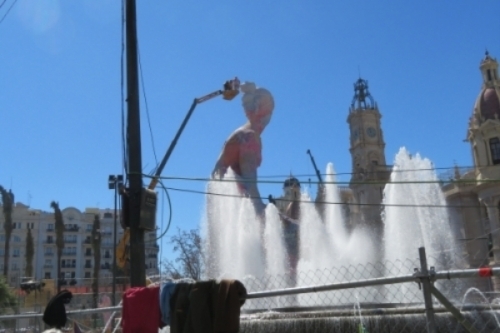 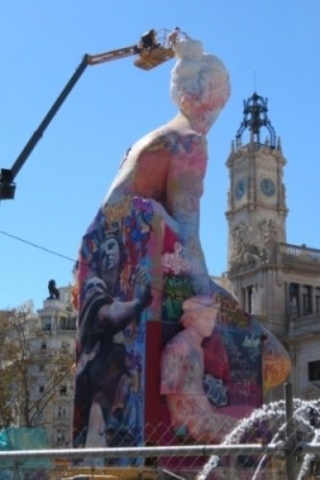 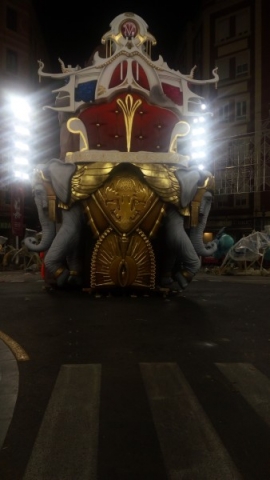 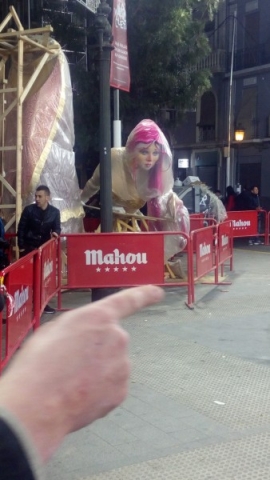 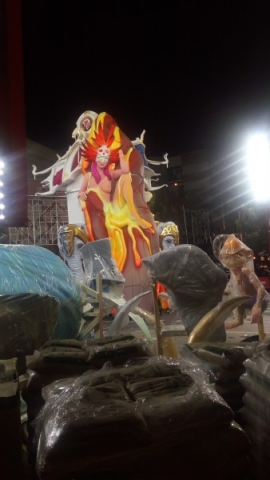 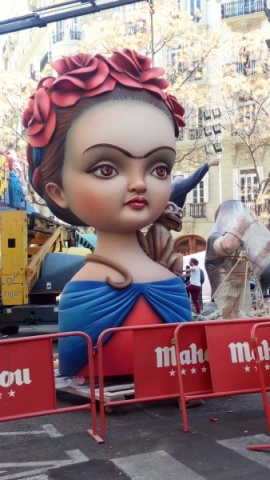 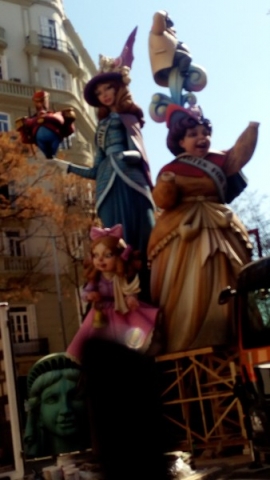 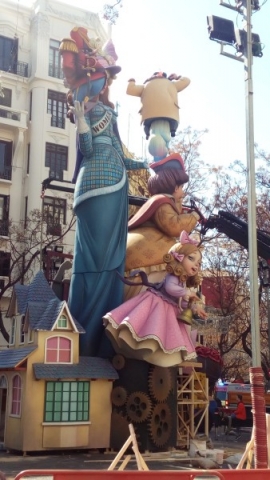 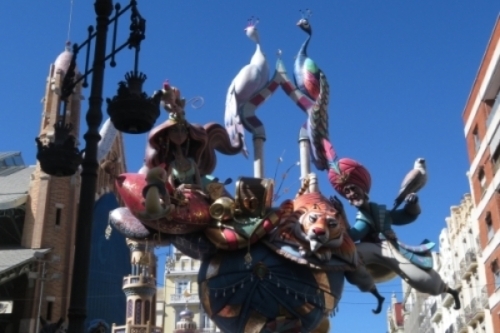 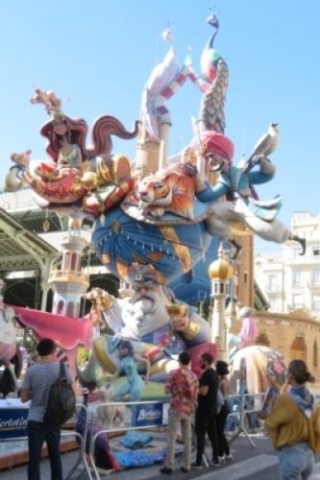 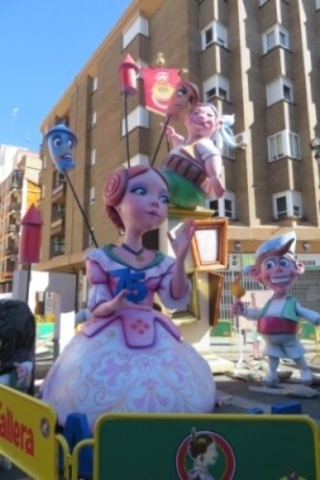 The Crida is the opening ceremony of Fallas.   Here is a good video of the one hour program.    There are lots of nice light effects on the towers. The impressive although very short fire boomies start around 50′. You can skip forward wherever you like, especially if you want to avoid the speeches in Valenciano.  There is lots of pop music as well as some traditional Valencian folk music.
It was a pleasant evening under the clear night skies.

Here is another illustrated small book, this one on our favorite place to live, Valencia, Spain.  You can swipe through the pages with your finger on a touch screen.   Enjoy!

Valencia: City on the Med

In a bar in Cabañal having tapas with Ximo and Andea.  They are great company.  We tried an array of unusual tapas, thanks to Ximo’s excellent suggestions.  Superb local wine.  I had a great time with them in May, sometimes in bar and sometimes at Ximo’s place.

Cabañal is on the edge of Valencia, Spain at the beach.  The narrow streets reflect the age of the place, which is full of many two story traditional Spanish townhouses.   This is a small water color painting. 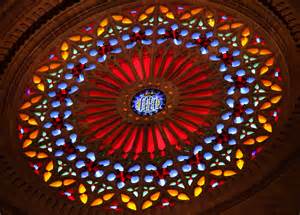 Palma de Mallorca is a major tourist destination for beach goers in the millions.  Germans, Russians, even the Spanish come here to luxuriate in the the beach resorts that line vast sections of the island’s coast.  But for a more serious tourist there is art, architecture and history, plus a neat one hour train to Sóller, a small, charming and tourist-overrun village in the mountains, in vintage wooden cars.  There are galleries for the upscale buyer and for Miró fans there’s his museum and studio on high with fine views of the coast.

After the the Iberians came the Phoenicians and Greeks.  The island was ruled from Rome no later than 123 BCE.   Then the Arabs arrived, whose fleet moored in the harbor and convinced the islanders to submit to Islamic rule while allowing residents to maintain their religious preferences.  Piracy was a significant source of wealth in the Islamic era, most likely largely due to the strategic location of the island.  The city was reconquered in 1229 by Jaume (James) I of Aragon.  His son built Bellver Castle and started the Cathedral.  In 1391 anti-Jewish killings were widespread.  Those who did not leave the island and survived were forced to convert.  Two gangs ruled the island in the 17th century,  when piracy was again widespread, while the Jews suffered tremendously thanks to that lovely chapter of Spanish history, the Inquisition.

The Cathedral, called La Seu, was started in the 13th but not finished until the early 17th century.   It is a Gothic structure and by no means is its exterior among the most attractive of that style.  From the sea it features plain bulky buttresses, just small ‘flying’ ones reaching out to  support it’s magnificent height.  Inside is another matter,  is sprinkled with light from the magnificent stained glass windows.  The rose window is the largest of the Gothic world.  The graceful interior lines make for an amazing visit.

For a resume of Gaudi’s work on the Cathedral, see http://www.gaudiclub.com/esp/e_vida/mallorca.asp  In Spanish. There are some Modernismo buildings in Palma.  Modernism is the term given to the version of Art Nouveau in Spain exemplified by Gaudi. For a change from the narrow streets of the old town and the Gaudi architecture, a common destination is the town of Sóller.  It is just 30 or so kilometers from Palma by car.  We took the train.  The hour long journey takes you through some lovely mountain scenery, passes above and around the town then descends practically to the center.

But what’s there to eat and drink?

This was a rather tasty dish, which we had at La Botana, Career de Can Brodo (see photo below).  That’s an alioli  (garlic mayo) sauce on top.  It covers layers of thin pork and potatoes.   We had some excellent local wine, Tentacion Tempranillo 2015, a reasonable 12.50 euros a bottle.  It’s a strong wine, at 14.5% (the max you can get in wine is 15%, after which the alcohol kills the yeast).  Strong cherry notes after 4 months in the oak.

Want a quick bite?  There’s always these empanadas, beef, chicken, veggies, sometimes with peas.  They seem to like peas on the island.  I’m so glad!

Then there’s “arros brut,’ their rice dish, which we did not try.  And tumbet, which we really liked

Here’s a link to a much longer list, and far more than we could try in a few days.

Mallorca is much more rainy than Valencia.  Winter is a good time to visit unless you want to swim.  Summer is often hot and humid, depending on the direction of the wind.  If from the east it is cooler.

I would not put this island on the top of places to visit.  If you are down to second or third tier locations, however, it has enough charms to make it worthwhile.  It is a short 45 minutes by air from Valencia, and a 20 minute ride to town from the large airport.

The first video is a small Fallas.  The second is a huge one in front of city hall.

I did these small paintings at Aranjuez, Spain.  The Summer Palace of Spain is located there.  I wrote a bit about Aranjuez at http://www.garyjkirkpatrick.com/aranjuez-the-summer-palace-of-the-spanish-royalty/

A fall scene at Aranjuez:

At Aranjuez is the same scene as Carmen at Aranjuez.  But there is no railing separating her from the harsh reality below –it’s nearly winter, the icy gray of the cold Rio Tajo running on the backside of the Palacio.  Nonetheless there is beauty of sky and the shimmering reflections to enchant, but, yet, stay back.  It reminds of those mythologies we invent to account for both the cruelty and charm of existence; no wonder our deities are so self-contradicting.

I was thinking of how I would miss my new friends, the warmth of her standing there contrasting with the coldness of the water, the building, affection as a guard against life’s sometimes harsh realities.

This building sits just across from the Palace.  It was built in the mid 1800’s and completely renovated.