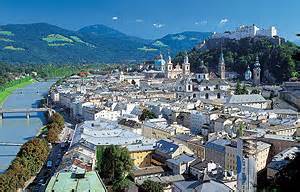 There’s enough to see and do in Salzburg, Austria for the three days we were there, although beyond that I am less optimistic.  It’s certainly attractive enough for longer term living but a bit on the small side, and a good four hours from Vienna for more intensive living, and the winters are still cold and snowy enough to discourage any but skiers and ice skaters. A bit of background and then some highlights.

The Old Town (Altstadt), a World Heritage Site is famous for its well preserved baroque architecture.  It is home to three universities.  The natural Alpine setting attracts visitors in summer as well as winter.  Salzburg is the birthplace of Mozart, the 18th-century composer,

and the setting for the Sound of Music, using Mondsee Abbey, the festival concert, Nonnbery Abbey, Mirabell Plance Gardens, Residence Fountain, and various locations in Old Town.  The display of swastikas was allowed in street scenes after the director said he would use original footage showing an enthusiastic crowds cheering Hitler if live use was not allowed.  The locals know little of the musical but it is an attraction for American and other visitors stimulated by the fame of the film, which is not my favorite by any means.

“Salzburg’ means ‘salt castle,’ referring to the use of the river for transporting salt.  Human settlement dates at least to the Neolithic era (Stone Age, 5000-10000 BCE), with signs of early Celtic settlement. The city became the seat of the Archbishop of Salzburg, a position that at times combined secular and religious rule under the auspices of the Holy Roman Empire.  This resulted in the construction of the Cathedral and Residenz which now adorn the city center and which we visited on the three day, 36 euros pass which includes local transport.

The Cathedral and Residenz display many features of the baroque.  The window pediments, for example, are typical.  You can see them rounded and with rather curvy elements such as you see to the sides of the center top pediment in the photo below.  This style of architecture came out of the Papal reaction to the Reformation and is an expression of the Counter Reformation.

The fortress is another major site in Salzburg.  It overlooks the city.  The funicular gets you a good part of the way up.  The views are fabulous, making up for the mediocre visit to the castle’s interior.