Pechersk Lavra  is also called the Kyiv Monastery of the Caves.  It is an Orthodox Christian monastery located on the cliffs overlooking the Dnieper River in Kiev.  There are extensive caves which were occupied by monks.  There are beautiful church domes.

St Sofía, digital painting of one of Kiev’s superb churches.

Saint Sofia, dating from the 11th century, is one of the most important churches of Kiev.  It is named after the Hagia Sofia in Istanbul, an amazing structure dating from the 3rd century Roman period, when Istanbul was called Constantinople after the Roman emperor Constantine.  The buildings bear no resemblance to one another, however.  Saint Sofia’s origin is in the Kieven Rus period, when the region was governed by a loose federations of Slavic and Finnish people.  It has the impressive golden domes you find in Poland and Russia.  The art decorating the interior has the same Byzantine look as well.

Kiev’s architecture is impressive, largely from the 19th and early 20th with some Soviet Russia era contributions.  The city is built on hills, and on cliffs overlooking the Dnieper River.  This allows great views of the rooftops as you walk about.

St. Cyril’s Monastery has a 12th century church with a baroque exterior, however the interior retains much of its 12th century decor, called Kievian Rus. I do not think that this ceiling piece is 12th c, but it is wonderful nonetheless: 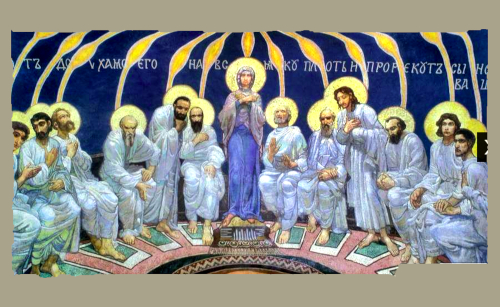 The Soviets destroyed the cathedral in the 30’s, and in a telling moment, the Ukrainians rebuilt it to match the original after the fall of the rust ridden Iron Curtain.  We can see it in all its glory today.

The interior is almost as astounding as the exterior

In 2013 protesters took refuge here after a rally against the then President Viktor Yanukovych. The next day they emerged and were joined by more than 1 million Ukranians, who then chased ole Viktor from office for his pro-Putin policies. Guess who was advising Viktor on his pro-Putin policies and did the same for some guy who is now living in the WH.