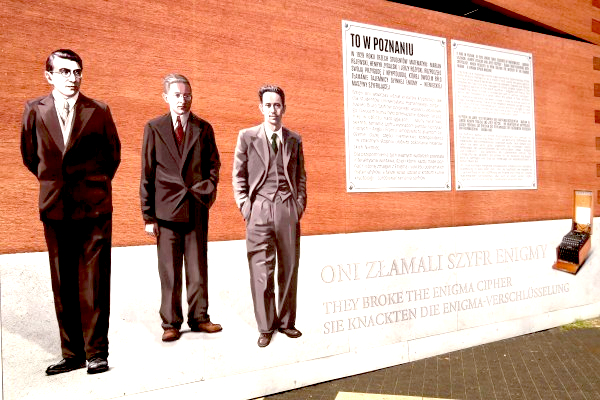 We ran across the sculpture and exhibit concerning the breaking of the German Enigma code while walking in the downtown area of Poznan.    I’d heard both that the Polish a Brits broke the enigma code.  There is an excellent movie called “The Imitation Game” about Alan Turing, (see https://en.wikipedia.org/wiki/Alan_Turing )

In late 1932 Marian Rejewski broke the code of the German Enigma machine.  Without knowing how the machine was wired, he was unable to read the messages. Hans-Thilo Schmidt, a French spy obtained information including the daily keys used in the fall of 1932.  They put these materials into Polish hands. With that information and actual coded messages Rejewski was able to turn the coded messages into understandable text.  Later the Germans added two more rotors.  The Poles did not have the resources to break the code again, and thus passed the baton to the UK in July of 1939.  Rejewski, and cryptanalysts Jerzy Różycki and Henryk Zygalski in the interim developed extensive materials which they gave to the UK as well.  Thus Turing was not starting from scratch. 2 thoughts on “Poland’s Enigma in WW2”