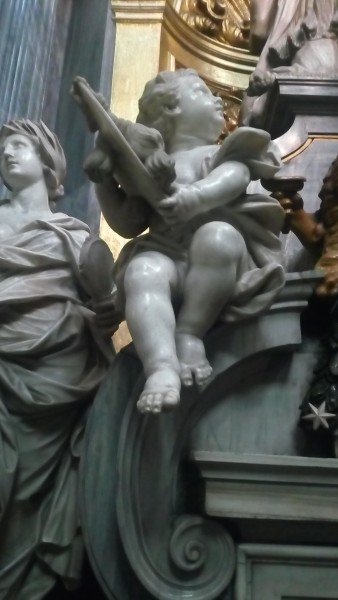 The train carried us for a bit over two hours in a full six person compartment, my 20 kilo suitcase perched precariously above our heads.  We are going from Poznan to Wroclaw.  Wroclaw has a complex history.  It was born in Poland, later controlled by the kingdoms of Bohemia, Hungary, Austro-Hungarian Empire,  Prussia. and  Nazi Germany.  It was founded circa 950, like Poznan on an island in a river.  Also like the other cities we’ve visited  it was a member of the Hanseatic League (1387), which helped make it a wealthy city.  Among its famous inhabitants are a director of the Clinic of Psychiatry, Alois Alzheimer.  A professor named William Stern developed the concept of IQ in the same turn of the century era.

During the war there was no fighting until February, 1945.  The Germans decided to hold the city and did so until after the fall of Berlin.  About 50% of the city was destroyed, some by the Nazis who did so in their efforts to fortify the city and the rest by Russian carpet bombing, with 40,000 civilians killed.  By that time refugees from Germany and elsewhere had increased the population to nearly one million, including some 50,000 slaves and 30,000–60,000 Poles relocated after the end of the Warsaw Uprising.   After the war the German population of 190,000 was forced out.  Poles ejected from its eastern territory, mostly around Lviv now in Ukraine but then in the Soviet Union, then moved in.

Wroclaw, called Breslau when it was in Germany,  is jam-packed with notable architecture of various styles including the predominant Gothic, some significant examples of the Baroque, at least one Bauhaus (the bank building in the Rynek), Art Nouveau, and of course some Soviet era concrete block.

.   The Rynek is spectacular, a large open space surrounded by fabulous buildings in various styles The Brick Gothic Old Town Hall in the Rynek dates from the 13th c.  You can visit the original council chambers, with period furniture. The city was founded on an island now called Ostrów (island) Tumski (Cathedral) in the Oder River.  Wroclaw Cathedral dates from circa 950.  There are several islands and altogether there are hundreds of bridges making it among the highest number in the world, just barely behind Venice.

We paid the extra to see the chapels, rewarded by the superb sculptures of the Giacome Schianzi chapel.  I later learned that the St. Elizabeth is by Ercole Ferrata, a student of Bernini, and that the cardinal’s tomb is by another Bernnini student, Domenico Guidi.  Bernini!  No wonder I was so floored.

The unemployment rate is just 2.2%.  People from around Europe come here looking for work as a result.  This is inflating wages and prices generally, although it is quite inexpensive still compared to France, UK and even less than Spain.  We have had lunches for two with a beer for from $10, in Valencia lunches start at $12 with wine, in Paris closer to $18 plus wine.