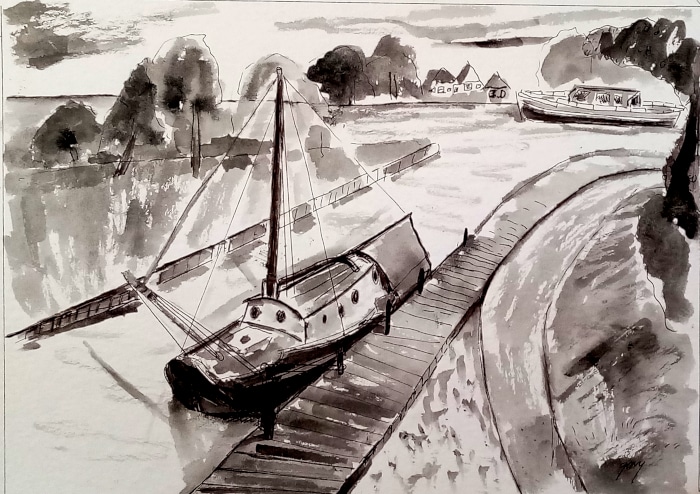 We are east of Emmelord in Vollenhove. Vollenhove dates at least to 944 CE. Toutenburg Castle (see photo below) was the summer palace of the bishop of Utrecht, also the secular ruler of the area. The wealthy built residences in the town proper, unusual for the time, and as a result Vollenhove came to be called the City of Palaces.

The town is in a peat zone, thus shipping was central to the local economy. It was on the Zuiderzee. They started to drain the Zuiderzee in the 1930’s, then suspended the process when war started, resuming in 1942. Now this and other villages are no longer on the shore but on hard land. Well, a goodly amount of hard land, given how much waterway remains.

The previous day we walked around Blokzijl, an even smaller fishing village than Vollenhofe. There we said goodbye to our Dutch friends with whom we spent some 12 days together as they took us to their favorite moorings and towns in the northeastern part of the country, their favorite.

Blokzijl is a Johnny come lateley, as it was founded only in the 1580’s. It arose out of the peat trade. A canon remains on the dike, used to warn of approaching flood waters of the Zuiderzee upon which it rested. The large houses around this gorgeous harbor date from the 17th century.

Kalenburg vies with Geithoorn as the most charming village in the country. The canal runs right through town, and it’s large enough for boats like ours, whereas in Geithoorn the canals are small so you canonly go through on small outboard craft. The houses there are overall more impressive and the canals are crossed by lovely, curved pedestrian bridges. However there are many lovely houses in Kalenburg and two restaurants on the canal. Here is our video of our passage through this one house wide village.

I will have more on the lovely sights of this area.