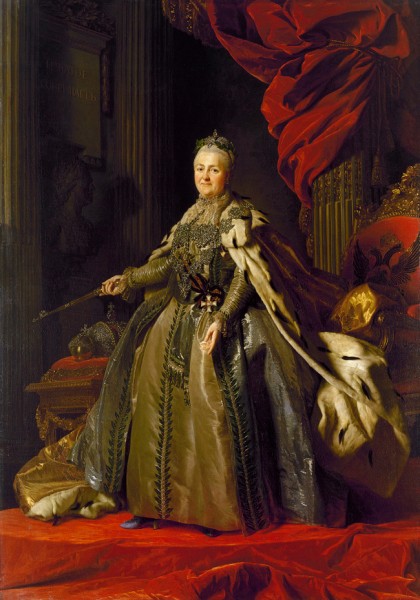 The Hermitage possesses over 3 million items including some of the finest examples of European art and holds the largest collection of paintings in the world.   The art collection was founded in 1764 by Empress Catherine, those purchases coming via an art dealer her country of birth, Germany, and much expanded by her successors.   It has been open to the public since 1852.  There is comparatively little Russian art-  that is to be found at the also excellent albeit much smaller Russian museum.   European artists dominate the collection of paintings and sculpture, and much of it is French, Italian and Dutch.   The excellent collection of Impressionists is in the General Staff Building

There are tons of portraits in the Winter Palace, the majority of them of high quality.  You see more of Catherine the Great than any others, it seems, which isn’t surprising given who founded the museum.

Several that I found of particular interest.  This painting was done in the French Rococo style.  The woman is wearing a  colored silk dress. There are contrasts of colors and strong shadows.

The next painting gets the following write up in the Hermitage site:  “Few artists have truly successfully depicted children, but Anthony van Dyck in this portrait of the daughters of Philip, 4th Lord Wharton, produced a genuinely appealing image. It was painted during the late, English period of the artist’s career, and is executed well within the traditions of Western European official portraiture. The girls are shown posing statically against a very roughly indicated, generalised background, with just a hint of a decorative landscape. Dressed and coiffed a la mode, they look like true grown up ladies, the eldest holding herself importantly and with a sense of her own importance, just like a lady at court. The youngest gently holds her sister by the shoulder, frozen in the pose in which she has been stood by the artist. The official majesty of the formal portrait is softened by the little dog, surprised by his mistresses’ immobility, who scratches wonderingly at the eldest girl’s dress with one paw. With its elegant colour scheme, dominated by cold pearly-grey and silver-blue, and the virtuoso skill in conveying the texture of fabrics and jewellery, van Dyck’s painting yet manages to be a very gentle and informal image of two charming girls.”   https://www.arthermitage.org/Anthony-van-Dyck/Portrait-of-Elizabeth-and-Philadelphia-Wharton.html

Caravaggio is a master of the light, although this is not the most dramatic of his paintings in this regard.  There are three versions of this painting.  The version in the Uffizi there is a table-top in front of the player, but in this versions it is marble with a violin and flowers.   The notes are so exactly painted that we know who the printer is, the Roman Valerio Dorica.

The collections are in six historic buildings along the Palace Embankment, that is along the River Neva.  The Winter Palace is the largest of the buildings and has the most art –  all of these photos are from this building.   The museum has several exhibition centers abroad, such as the one in Amsterdam.

In the basement there is Siberian and Caucus art-  one small example:The Roman and Greek collections, as well as the Egyptian, are also in the basement area.

The museum supplies a good map, but it is still a challenge to navigate at times.   It took me a while to wind my way to the cafe area in the Winter Palace.  There are only two and for whatever reason they are right next to each other.  There are some grand spots elsewhere in the Winter Palace where having a coffee would have been quite luxurious!

I’ll remember the Hermitage rather more for the rooms than the art, which while excellent, is to be found elsewhere as well.  One could say the same of the palace, but I found it different enough, and it’s general setting as well, to easily justify the costs and challenges of coming to Russia.