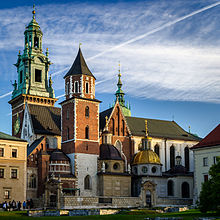 Krakow is replete with finely preserved notable architecture.  The Rynek Glowny (Main Square) is in the center of the old town (Stare Miasto).  Sukiennice (The Cloth Hall, 1400) is a fine example of the Renaissance.  The Cloth Hall was a center for the export of salt (there is a huge salt mine nearby), textiles and lead and the import of spices, silk, leather and wax.  The Rynek Glowey is normally full of visitors, horse drawn carriages, and outdoor seating at the many restaurants.

A short distance away is St Mary’s Basilica is late Gothic church with two unmatched spires at 80 m (260′).  One was originally a city watch tower.   The Basilica’s foundations date to the early 13th century.  The church has a famous wooden altar piece by Veit Stross (Wit Stwosz).  Every hour a trumpet plays from taller tower, the former watch tower.  It commemorates the 13th c. trumpeter shot in the throat while sounding the alarm before a Mongol attack on the city.  The noon hejnał is broadcast Polish national Radio 1 Station.

The Royal Cathedral is another Gothic structure dating from 1100.  Pope John Paul II gave his first performance as a priest here in 1946.

The Church of St. Adalbert, which is one of the few remaining examples of the Polish Romanesque style in Krakow, and the oldest Christian chapel in the city to boot.

The pointed arches show the Gothic character of the Collegium Maius

The Barbican is a fortifcation once connected to the city walls just behind it.

The Church of St Peter and Paul is Baroque in style.