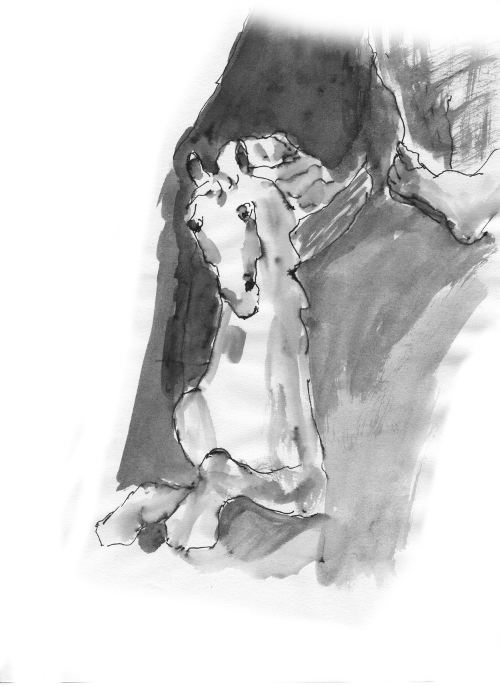 It was designed in 1651 by Bernini for Innocent X of the Pamphili family.  The family palace faced onto the piazza as did the church, sponsored by Innocent as well.  When Innocent put out the bid for the fountain, Bernini was not allowed to enter, having fallen out of favor when the towers he added to St Peter’s Basilica caused the church walls to lean.  However Bernini made a model of the fountain for a mutual friend, who entertained often and whose guests included Innocent X. He saw the model, asked who made and when told said, “The only to avoid hiring Bernini is to avoid seeing his work.”

From the Wikipedia: “The base of the fountain is a basin from the centre of which travertine rocks rise to support four river gods and above them, an ancient Egyptian obelisk surmounted with the Pamphili family emblem of a dove with an olive twig. Collectively, they represent four major rivers of the four continents through which papal authority had spread: the Nile representing Africa, the Danube representing Europe, the Ganges representing Asia, and the Río de la Plata representing the Americas.”  the wiki

I sat to the right of the horse and made several quick drawings/sketches.

This is a drawing of one of the statues in the church: 2 thoughts on “St Agnes at the Track – Piazza Navona, with pen and ink drawings of Fontana dei Quattro Fiumi”