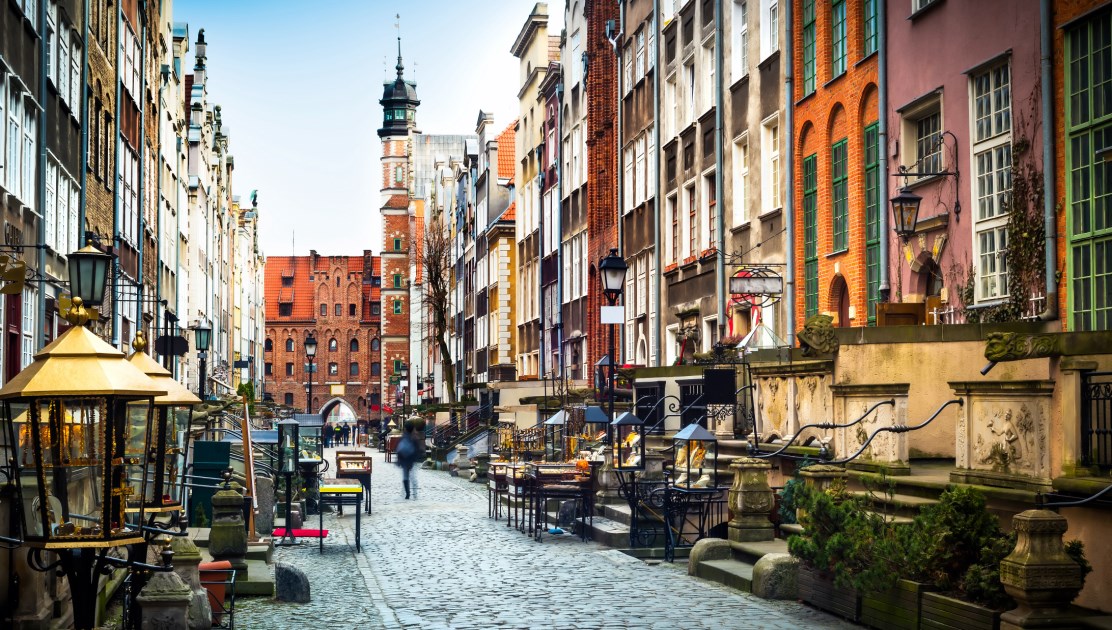 G’day from Gdansk, on the Baltic Sea in northern Poland.  From here Lech Wałęsa led the dock workers union Solidarity on strikes and other actions that set in motion the downfall of the Soviet Union. It has been important in other eras, such as the 1700’s, when it too, like Krakow, was a member of the Hanseatic League — take a walk though the port area and you will think you are in Holland, with all the Dutch Golden Age architecture arising during that period.

We traveled via train from Lublin, the first leg on a 1970’s vintage Intercity, a little worn but  clean, and with new seat fabrics.  The compartments were sparsely populated for the 0800 run.  We changed in Warsaw three hours later, averaging just 60 km/35mph for this part of the journey.  The next leg was on a sleek modernity which averaged 100km/60 mph, not the 250km/h you can get in France and Spain, but smooth as well as lovely in all respects.

We spoke with the woman sitting with us.  She was no more than 40, and spoke English very well.  How is it that so many people speak English so well in Poland, Peg asked?  She said everyone is taught.  She was the first generation to switch from Russian to English, starting class at age 14.  The first year was difficult for her but once she got the basics she could begin to talk,  helping her learn with relative ease.  English grammar, she said, is a lot easier than the Polish, although spelling is more difficult.  In Polish the marks on letters tell you which sound the letter makes, something which would of great benefit in English.  Nowadays children start learning English in kindergarten, using the immersion method—  the English teacher speaks only in English.  This is producing excellent results, judging by the amount of English we encounter.

This is our second time in Poland.  The first came in July of 1998.  You can check it out at Poland 1998.  Our impression of Poland is Poles apart (sorry about that pun!) from our current.  Cars abound along with the traffic jams,  instead of much more crowded public transport from the Communist era.  Restaurants were fewer and lower in quality and there were few foreign, which now abound, especially Italian.  The people then seemed more glum, and there were far fewer tourists, both conditions which no longer apply.  No one spoke English, but today English effective language instruction is universal.  While not everyone speaks English, the ones who get practice speak and understand tourist level English very well, and in some cases their skills go far beyond.  Buildings are clean, new construction is common, while public areas are spic and span still.

There is a lot to see here, and we’ll be here for a few weeks.  More posts on the way.  Here are additional photos from our walk downtown yesterday   https://photos.app.goo.gl/pzNEQNUK8ZkR1ckZ9