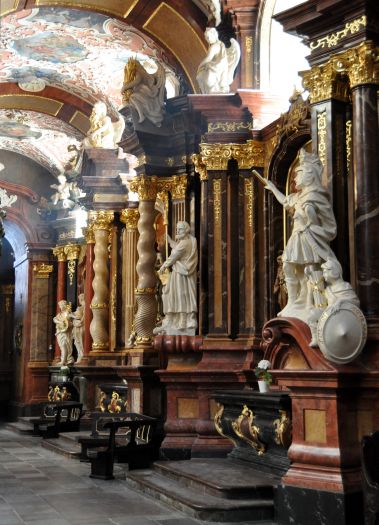 There are three outstanding churches in Poznan.  The most important and oldest is not the most beautiful although in its setting it is quite charming.  The other two rank as among the best Baroque churches anywhere, which I say having been in all of the great ones in Rome, Palermo and elsewhere in Italy.  I have every reason to believe that they were both done by Italians using Italian marble and other materials.

Archcathedral Basilica of St. Peter and St. Paul is on Cathedral Island which is also shares with two excellent museums.   The first church on the site was built in 968.  The remains are still visible in the basement.  Starting in the 1300’s the church was rebuilt in the Gothic style, renovated into the Baroque style after a fire in the 1600’s.  The damage in 1945 led to its reconstruction in the Gothic we see today.  Pope John Paul II visited and is honored in the church.  The setting is a amidst lovely trees and buildings, some church owned, on the small island where Poland was founded.  The site was at one point a palace.   Archaeologists have excavated the area, which is in front of the cathedral. This stunning church was built in the 1600’s.  Along with it is a Jesuit college.  For interesting details see St Stanislaus