I have long been an admirer of Lech Walesa.  He was the head of Solidarity, having come to that position by way of his willingness to speak up for his fellow workers and take the jail time, periods of unemployment and other consequences.  He was a father and a husband, so his actions were not easy for him nor for his wife and family.  They helped develop Solidarity into a political movement with 9.5 million members at its peak, after having become the first non-government controlled trade union in the Soviet bloc.  Solidarity helped bring down not only the Polish communist regime but helped bring about the fall of the Soviet Union.  Lech maintains an office at the Solidarity Museum and at 72 still comes to work there. 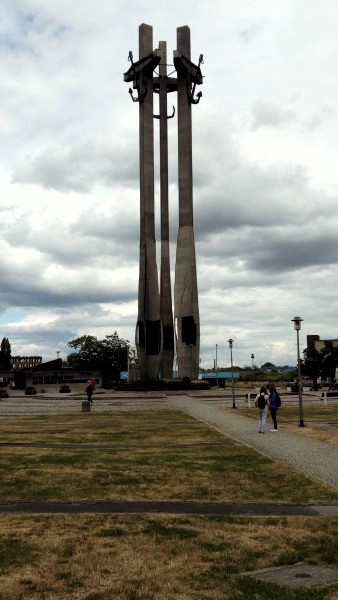 Yesterday we took a walking tour offered by the tourist bureau.  There are two, and we chose the Solidarity tour, which covers the period starting in 1945.  She made no comments about the present disturbing situation in Poland, although it was clear she is not a supporter of the current authoritarians in power.

Gdansk is the home of Solidarity, the first non-governmental trade union in the former Soviet bloc.  It became a political movement, reaching a peak of over 9 million members.  Today there remain some 400,000.  It’s full name is Independent Self-governing Labor Union.

In its effort to crush Solidarity, the government imposed martial law in 1981, imprisoning thousands including Lech Walesa.  This brought financial support from Pope John Paul 2nd, from Krakow, and the US government and the AFL- CIO.  The list of demands made in 1978 was precipitated by female dock workers, our guide recounted, who pressed for additional concessions from the government beyond allowing the formation of a non-government union, including the elimination of censorship.  On the 31st of August 1980, the government agreed to the demands and Solidarity was formed from over twenty labor committees.

Another demand was a monument to victims of Communist suppression, the first such in a Communist country.   Thirty people died when a 1970 protest was met with machine gun fire

A combination of bad working conditions, massive increases in food prices, shortages and other economic failures led to workers’ decision to take on the Communist government.  The government was backed by the Soviet Union, massively residing on its border, with post war repressions in the Czech Republic and Hungary vividly recalled.  The Soviet Union took 45% of Polish territory following the Yalta conference, a fact which must have been still fresh in the minds of organizers.  That territory remains part of Russia.

The movement was closely tied to Roman Catholic social policies promoting the common good.  Jean Paul II’s photos remains on the entrance to the Solidarity Museum and the shipyard, next to the list of demands.

Our guide lived through many years of repression.  I think she said that her family came from the eastern side of Poland that is now part of Russia.  Along with hundreds of thousands, they left when the Russians took control.  The Russian soldiers treated the Poles and particularly Polish women as they did Germans in the immediate post war period.  Brutality and rape were common, thus contributing to this exodus.

She recalls rationing for just about everything — meat, potatoes, shoes to give just a few examples.  Her shoes were wearing out during that period.  The two stood in line for shoes, after which they could examine the offerings.  There were always just two styles.  Often the shoes came with not two but three shoes in the box.  Sometimes the shoe sizes did not match.  People stood outdoors and traded with others whose sizes were also mismatched.

The government controlled all the sources of information.  When the government did not like what was happening and it suited their purposes it would not mention the incident or give a false version.

The museum recounts the events that led to the expansion of the union to about 9 million, the attempts to counter its impact and the eventual downfall of the Polish government.

The relationship between the union and the Church greatly facilitated union efforts.  In  Sollicitudo rei socialis, Pope John Paul II preached solidarity with the poor and marginalized.   Wałęsa was publicly Catholic piety, said, “The Holy Father, through his meetings, demonstrated how numerous we were. He told us not to be afraid.”  This sounds like natural reasoning and not an account of divine intervention, but be that as it may, the movement was successful in large measure.

The priest Jerzy Popiełuszko was very active with the union, celebrated masses during strikes.  The Communist regime is blamed for his murder.