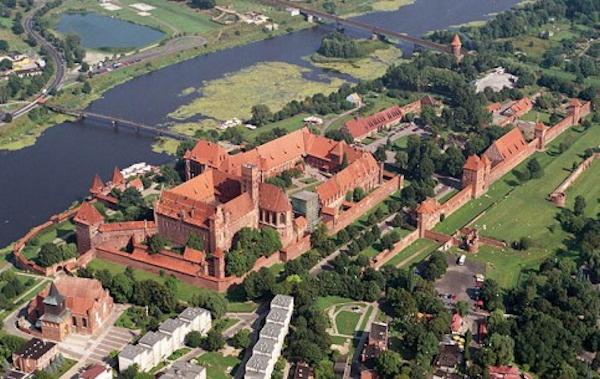 Teutonic Knights built Malbork Castle in the 13th century.  At that time Malbork was in Prussia, shifting in and out of Polish control, changing into Polish control in 1945.  It is the largest castle in the world by the land area it covers and when built the largest brick castle in the world. Sitting along the Nogat River, it has been a Polish royal palace, later to become a Nazi fortification in the waning days of the Third Reich, subjecting it to Russian bombardment.  Heavily damaged and afterwards faithfully restored, today you see a structure in fine condition and a great place to wander around, through narrow passages and steep winding staircases.

I’ve included some of the interesting artwork you find there.  The walls were beautifully painted, judging by the remains.  There are many interesting statutes and a few paintings. The castle also has a mill.  Here is a pen and ink of the mechanism: