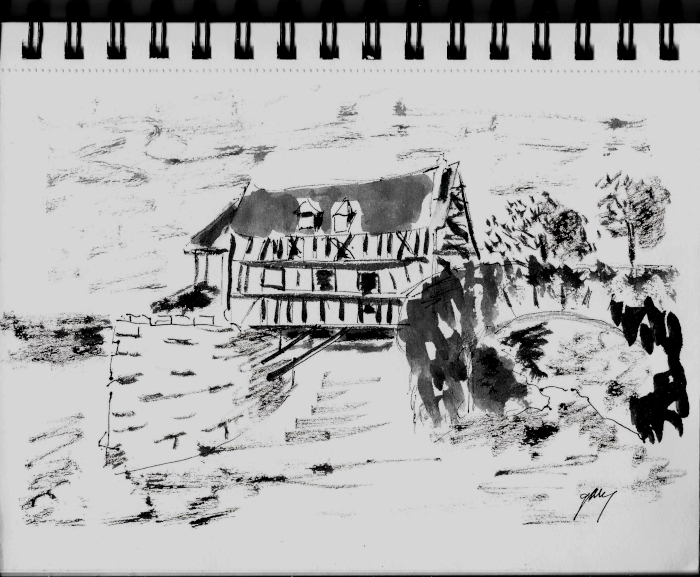 Vernon is in Normandy on the Seine downstream from Paris.  It’s castle, built in 1204, served to protect Paris.  The mill ground flour, which could then be readily transported on the Seine.  It is a very short distance to Giverny, where Monet established his studio and residence.  There is also a museum of Impressionists.

The first mention of the town dates to Roman times.  The town was referenced circa 750 by Pepin the Short.  The name might be Latin or Celtic in origin. In French today ‘verne’ is a speckled elder tree.  In English it is a proper name.  (I add this as non-native English speakers read my blogs).

There is a small dock for pleasure crafts, as you can see in the photo.  The mill sits on a bridge destroyed following the D-day invasion.  A new bridge crosses the Seine to town center, a charming village.

Dating from the 11th century, Notre Dame is a good example of a Gothic church.  The lead glass windows are impressive modern pieces, replaced also as a result of WWII bombing.   The rose window is flamboyant thus of later Gothic origin.  The stained-glass windows are contemporary.  The originals were replaced after World War II bombing raids.  The many half timber buildings are mostly from the 16th century.

Town Hall is a grand 19th century structure with frescoes.  The tall 20 meter Tour des Archives is the remnant of the Chateau-fort.   At the Musée Alphonse-Georges Poulain  you can see two original Monet works, Nymphaeus and Effect of sunset in Pourville.   There are several by his step daughter Blanche.   Only copies of Monet’s paintings are at Giverny.  https://www.francethisway.com/places/vernon.php . Additional commentary see https://www.francethisway.com/places/vernon.php
We had lunch in a picturesque restaurant with some good examples of Normandy cuisine.  Andouillette is tripe in a sausage casing.  I stuck with steak pomme frites, however.  I asked for it medium and they got part of it right.  They grilled it a bit more but it turned tough.  The frites are the best I have had anywhere ever!  Peg ordered fish delightfully grilled, and a side of polenta with a bit of cheese. 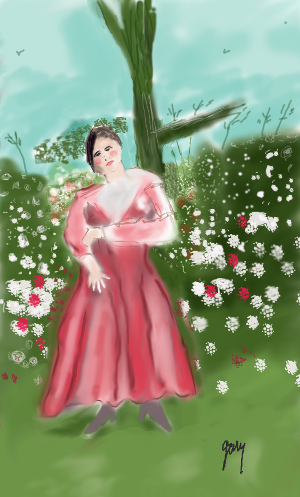 Another piece motivated by the Dior exhibit at Arts Decoratif!  Paris, 2017 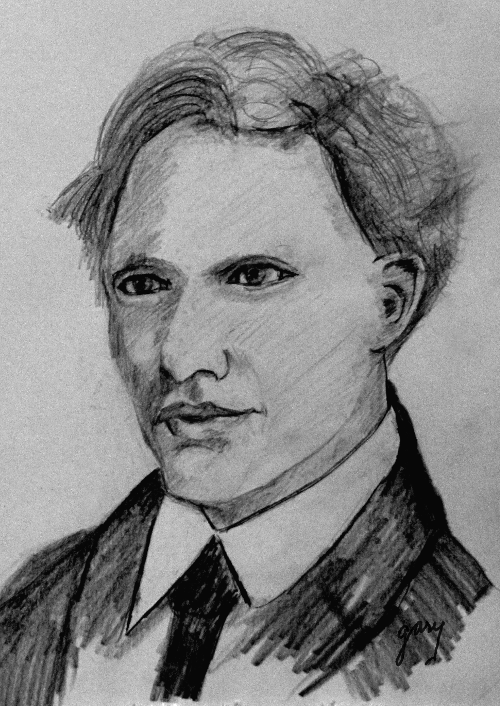 “Loving Vincent” is a flick about Vincent Van Gogh made entirely of paintings done in his thick paint, swirly, expressive style.  There are 65,000 paintings in all, each done on glass plates.  The plates were first placed before the filmed of the costumed cast members, reducing drawing time dramatically, and making it possible to make this movie with just 125 and not, say, the 10,000 artists it would have taken to cover an area the size of London or Manhattan if each plate were laid out in the original size.  All this adds up to an unusual experience and a total immersion in the visual world of the artist.  But there’s more.

The film could have suffered significantly from the flaw that plagues musicals, whose stories often serve as an excuse for the next number.  Loving Vincent’s story line, however, is not so thin.  Its basis is writing that challenges the initial contention that Van Gogh committed suicide.

The movie opens with the postman possessing a returned letter addressed to Vincent’s brother Theo.  He recruits his son Armand to hand deliver the letter.  Armand soon finds that Theo is dead, so he looks for an alternative.  The film is a series of interviews of the people who knew Vincent, all portrait subjects, interviews that further what turns into an investigation of the death of the artist.  As things unfold we are provided a picture of the life of Vincent as well as his death, some interviewees corroborating the suicide theory, while others leave us doubting that verdict.

Several issues emerge that lead us to question the suicide conclusion.  Having pulled that trigger you would have left black powder marks on your clothes and hands, and the accounts show conflicts in that regard.  Also we are told of the persistent ridicule and bullying by town youths, any one of which could have had motive, perhaps even the one who later confessed to mistreating Vincent in his youth.  Then there is Vincent’s state of mind.  “Loving Vincent” is what Van Gogh wrote in each of his letters to his brother Theo, with whom he had a close relationship.  Thus Vincent was not entirely alone and unloved by family, and he was close to some of the interviewees as well.

There are several other observations of interest.  First, Vincent wrote, “I want to touch people with my art.  I want them to say:  he feels deeply, he feels tenderly.”   Are those the sentiments of someone who would end his own life?  Perhaps but perhaps not.  Second, Vincent’s lack of commercial success could certainly contribute to his perception of self-worth.  However Monet, the most famous of painters,  had recently highly praised Vincent’s art, and Vincent sold a painting, his first.  Third there is the odd location and angle of the lethal wound.  People who attempt suicide with a gun usually go for the head not the stomach.  None of these observations are conclusive of course, but there is certainly enough to cloud the official verdict, and to give substance to what would otherwise be an art slide show with an excuse for a story.

The colored images flicker in a way that other animations I have seen do not, adding an element of visual intrigue to that surrounding conflicting images of Vincent’s life and death.  They also add an element of brain fatigue.  Fortunately the flash backs in black and white give much-needed rest for the eyes.

This is a unique film about a unique man making unique art.  Check it out – and stay through the credits.  You’ll be treated to Lianne La Havas’s deep toned charming rendition of Starry Starry Night.

A friend and I went to Auvers-sur-Oise, which is not too far from Paris.  It is here that Vincent Van Gogh lived his last months.  While he lived in this town Van Gogh did a painting of the church,  now one of his more famous paintings among the 800 he squeezed into his short life.   Here is my rendition, in memory of this man who contributed so much to art and who received so little in return.

The first of the following drawings I did at the Van Gogh Museum in Amsterdam, which displayed a photo of a young Van Gogh.  This and other early photos are a stark contrast to the gaunt and haunted look of Vincent’s later self portraits, which are widely seen.  Here is a more rare glimpse of the man.

In case you need a touching moment, here’s Lianne’s rendition of Starry Starry Night.  Don Mclean gave light to this song that will live as one of the most touching eulogies of all time, whose disturbed mind gave us so much beauty, so much innovation. 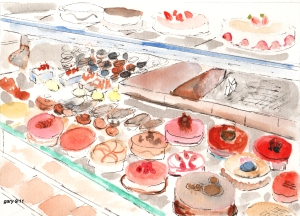 These are pen and ink drawings together with water colors from our time in Paris.  Some are from Courbevoie, famous for the impressionist paintings done on ile de la Jatte.   I spent a lot of time meeting with friends at Bar de la Gare and Cafe Bert in Paris.