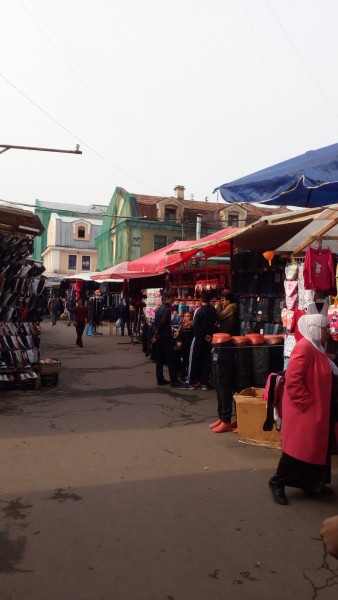 This is where people with less money go to buy and sell, quite the contrast from the high street just a few minutes away.  It is next to some very fancy areas and is slated for massive development, so this folksy shopping will be moved to the city’s edges.  The area is about 35 acres of streets and buildings in rough shape.

We bought umbrellas from one of the vendors.  He spoke English fairly well and as it turned out he was born in Pakistan.   He complained that the Russians are adverse to learning any languages.  While we were there a couple came by to ask the price of another umbrella.  He attended them briefly and then came back to say they are from one of the stans.  How could he tell, Peg asked.  From their accent?  No, from their appearance.  The distinction escaped us.

The goods could be from almost anywhere, except some of the very Russian winter hats with the fur ear flaps and a few other things.  There is a wide and fascinating variety of facial features, however, and in a few cases the dress is not typically western.  I’ll be looking to get photos as we go along. I’ve seen some that would make very interesting paintings.